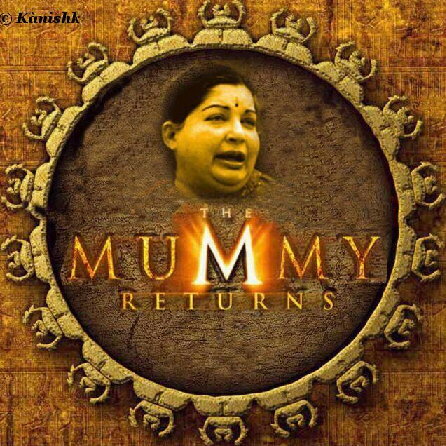 The Mummy finally returns to power. Chennai super kings will have a jersey color change from yellow to green.No more manjal will be used in marriages and in samayal. It will be replaced by a green color powder that is made from arali vidhai.. In Tamilnadu, the yellow powders wont be used for the next five years in rangoli, kolam and even while celebrating holi. They will be replaced by additional quantity of green powder.The tamil song "Manja kaatu mainaa" will be reworded into "pacha kaattu mainaa". Mangos, guavas and papayas will not be allowed to ripe.

Now it is time for the people in Tamilnadu to enjoy the following benefits from Mummy.

Even if these three are given freely to women, in many households, the husbands are the ones who are gonna use it. Poor men . They will have to be in the kitchen for the next five years.

Now this is a super offer. Which OS? Which processor? RAM? Does it have pirated crack version of

MS office software? Mummy has to be very careful on this. The oppositions will be waiting for a chance to find fault with her.

Now the buses will be crowded with oldies. Young guys and girls would not find buses to be a great means of trans

Green houses? So the yellow houses are finally snuffed out of the scene! The tussle between th

e two colors YELLOW and GREEN has finally found its answer in Green houses. Will these house produce gree

This would ensure equal distribution of property for the poor. I would personally like to see this promise implemented within this 5 year period.

Creativity at its very best. This would have made Mahatma Gandhi happy.

When we are striving hard to eradicate castism, why is Mummy bringing this up now? Smells fishy. The only

I have had a few friends who used to come to school with torn pants. This should be implemented at the earliest. Schools are gonna reopen in june.

and make Dr. Vijay as the brand ambassador of the Mangalyam ads? By the way, is the Gold worth 24 carats?

This is possible if Cauvery water is opened. This would probably create a problem between the two states.

A facepalm to Farmville. No more strawberry milk and Chocolate milk. Yippie.

Facebook was bombarded with interesting status messages about the election results

Chronicwriter predicted this on his birthday. Check his hand gesture.

Where is Vadivel? The latest Vadivel picture

and What is gonna happen to Kalignar? Will we see yet another arrest drama?

Captain was last seen catching a train to flee to Bagistan.I am not much worried about Vadivel. I feel sorry for our gaptun.

Winston Churchill had predicted this victory almost 60 years ago.

On a lighter note let me end this nutty post with a conversation between the outgoing CM and our PM. (If you had watched the Tamil movie Giri and if you watched the bakery joke between vadivel and Arjun, you would understand this following dialogue)