These days late i am so much immersed in Korean movies. The Korean movies mainly revolve around relationships. I do not know the language but thanks to sub-titles i am now able to watch a lot of foreign language movies.Italian movies are known for their cinematographic brilliance. The sepia color vision which was popularised by Italian movie makers has marched its way into Indian Cinema's too. Iranian movies are known for their natural screenplay. Latin movies are musically inclined. Croatian movies talk about love and war. Let me cut my "Know-it -all" crap here and let me come to the point.
The reason for this post is to educate the world wide audience about the strategy used by Kollywood (Tamil) movie makers in introducing the Hero in the movie. This is popularly called as the "Hero introduction scene". This is the scene where the faithful fans go berserk in the movie halls.
When the hero shows up for the first time, the movie halls in Tamilnadu ( India also) will experience a natural phenomenon called the "Koothu effect". This effect is a combination of thunderous whistles ( which are created by putting fingers inside the mouth and spraying saliva on those sitting in front seats), squirrel screams ( which is similar to the sound that the heroine makes when the villain attempts to molest her) and vigorous clapping ( which are way better than the claps that the Americans gave to the "Yes we can" speech of Obama).The koothu effect is garnished with cracker effect (bursting crackers outside the cinema hall) and paper effect ( Throwing shredded paper in the air which gives the snow flake effect to the cinema hall). This "Koothu effect" has its origins in India and one has to experience it to understand the real meaning of the effect.
In Physics, "The Koothu effect" is measured in Hertz.
1)For movie stars like Rajini, the koothu effect touches 20000 Hertz. All the Rajini-haters are requested not to decode the logic in his movies because by now you should have realised that Rajini's movies are not based on logic but only Magic.
2) For movie stars like T.R.Rajendhar, the koothu effect reaches 20000 hertz too. But it does not happen when he makes his entry. It happens when he dies in the end of the movie.Me and my friends once went to watch a T.R.Rajendhar movie (Veerasaamy) and we gave a standing ovation when he finally died in the movie. Such is the effect that he creates in the mind of the viewer.To read the Tribute article I wrote for Terror Romeo Rajendhar click here [link]
3) Heroines do not get the same koothu effect when they make their introduction on screen. How ever in recent times two names are said to be receiving the koothu effect that even crosses the 20000 Hz mark. The names of the heroines are Shriya and Namitha. Shriya has a size Zero figure and Namitha is blessed with more flesh than the blue whale itself. Irrespective of their Body Mass Index (BMI) these two heroines follow the simple KISS rule ( Keep it short and simple). The KISS rule is applicable to the costumes they wear ( do not wear). 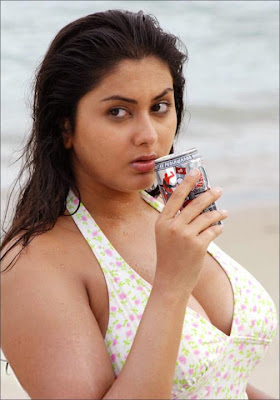 Though i can go on writing on this topic, I would just concentrate on writing what i intended to write for this Blog post. I would brief about my favorite two Hero Introductions in Tamil cinema.
1. The Man who gave a shock to the Transformer
He is the same guy who was tied to a Transformer by the Bad boys in the movie Narasimha. Unfortunately the transformer ended up getting the shock and the director of the movie died even before the movie was released and to top it all the movie bombed big time. Yes. I am talking about Mr. Vijayakanth. He is fondly called as Captain
His introduction scene in the movie Dharmapuri is the first of its kind. The mini- villain gets hold of a girl (The reason for the villain holding the girl is unknown). This is where a tough looking police man enters the scene to save the girl ( It is not our captain yet). The villain shoots the policeman but unfortunately the villain is not as lucky as Abhinav Bindra and hence instead of shooting the head of the police man, the policeman's cap ends up as the target for the bullet. The Police cap starts to fly and the camera zooms in to get a close up of the police cap. This is the exact moment a hairy dark hand that resembles the private part of a donkey appears on the screen and catches the cap. This hand happens to be the hand of our captain. (The audience will give the koothu effect now). Captain will give a priceless expression showing his sexy belly and his yellow teeth.
The villain use this opportunity and shoots at our captain. The whole movie hall watches in anticipation. The bullet travels in slow motion from the right end of the screen to the left end of the screen. Just when the viewers expect our captain to do a la-matrix-keanu reeves move to dodge the bullet, he stays still. (The viewers in the movie hall now move to the edge of their respective seats with thoughts running in their minds " will Captain die in the very first scene?"). The bullet hits the target. But instead of going inside captain's chest, the bullet just uses captain's body as a bouncing mat and bounces back and hits the villain and the villain dies on the spot (The viewers give the koothu effect now). If you do not believe this, do watch this 14 second video clip [link]
2. Terror Introduction
Terror Romeo Rajendhar's introduction should and would invariably feature in the Top three introduction scenes of the millenium in world cinema. All his introduction scenes are worth mentioning. His introduction scene in the movie "Veerasaamy" is even better than Sylvester Stallone's introduction scenes in the Rambo series. Pregnant woman are requested not to watch his introduction scenes. Statistic reveal that 342 pet dogs died when this movie was screened in Sun TV. Veerasaamy is India's answer to Jurassic Park. Stephen Spielberg would not have used any graphical assistance to create dinosaurs for his movie if he had seen veerasaamy before directing Jurassic Park.
Sans much crap talk, let me get into the core topic. Yes! The Hero Introduction scene of the movie Veerasaamy. The heroine of the movie is a social worker and she has a very noble heart. To support the families of all those who lost their lives in the Titanic ship, she starts a brothel business. The business even gets listed in the Forbes 500 list. The Villain happens to be a close associate of Steve Jobs (Apple computers).In order to curb the growing business of the heroine, the villain tries to molest the heroine. In Tamil movies, holding the heroine's hand is equivalent to molesting the heroine. As soon as the villain touches the heroine's hand, a urulakattai (firewood) flies from no where and hits the villain.
The villain looks around and finds out that the urulakattai has been thrown from an old shed. The villain's companions are sucked inside the old shed. (This is almost similar to the dinosaur introduction scene from Jurassic Park). All those who were sucked inside the shed are then thrown out through out through the roof of the shed. Some are even thrown out through the window. Just when everyone starts to scratch their heads thinking what might have sucked them in and then thrown them out, the Hero "Terror Romeo Rajendhar" makes his introduction through the broken main door of the shed. (The Viewers do not give the Koothu effect now. Remember that the Koothu effect for T.R. Rajendhar movies are given only when he dies at the end of the movie). To watch the Terror entry of Rajendhar watch this clip [link]
3. My latest picture

If you are still alive after reading/watching the first two clips, keep reading because you might be in for a surprise. Recently I was telling my friends that off late i am looking very similar to Brad Pitt. They never believed me. Even my Russian girl friend calls me Braddy Boy these days. By the by, Did i tell you that i have a girlfriend now ? I guess not. She is Russian. A blonde and she cracks wonderful jokes. She plays tennis. She is tall (6.2 feet). I am 5.5. Her name is Maria Sharapova.
She came to me this morning while I was still in bed and she pecked my neck and said,"Braddy, I love you". She smelt really good. She might have taken bath using the Dove soap that i presented her last night. She then said,"Braddy boy, I am gonna take a picture of you and I will keep it in my purse". I said "OK". Immediately she took a picture of me and uploaded it in her laptop and she is using my picture as her desktop background. I am adding the same picture here to prove to my friends that, I do look very much like Brad Pitt these days.

Do you believe me at least now?
-Chronicwriter
Posted by: Chriz